A quick afternoon visit to the banks of the Glamorgan side of the Loughor in SN50Y was made to give the square total a boost. The first tree I inspected, a Rusty Willow, had plenty of the expected epiphytes, one I was hoping for - Orthotrichum rivulare, plus another that I wasn't expecting - O. sprucei, which was fruiting and replete with gemmae, so in pretty full-on reproduction mode. This was a new species for me, which I suspect will prove to be more widespread along this river.
Posted by Barry Stewart at 20:00 3 comments: 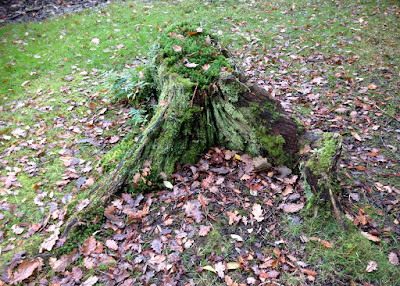 There's nothing particularly remarkable about this stump, which supported a modest selection of typical stump species, including some nice patches of Lepidozia reptans (photo below). However, one thing I've not encountered before was finding Microlejeunea ulicina growing on the shoots of Polytrichastrum formosum, the latter acting as pseudo-phorophyte for the normally arboreal M. ulicina. 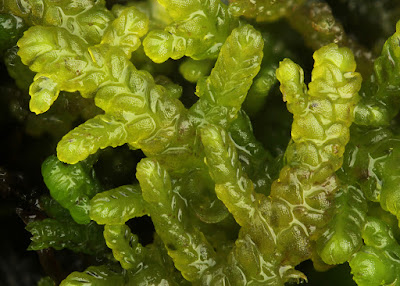 Posted by Barry Stewart at 07:28 No comments:

Campylium protensum has made a taxonomic quantum leap from a variety of Campylium stellatum to a full species and the two taxa can be difficult to separate with puzzling intermediates. After seeing Barry's recent post on the Abercanaid road cutting, where he showed a striking population of Campylium protensum, I wondered whether we've been overlooking this species in NPT and, in particular, misidentifying Campylium stellatum.
We've recorded Campylium stellatum along a number of forest tracks, e.g. there is a significant population in the Rhigos/Cwm-hwnt forestry on the border with RCT and others in the Rheola/Resolven forests (and doubtless, elsewhere). We haven't been able to check all the populations, but we've reviewed the Cwm-hwnt plants and one of the Resolven populations.The habit and morphology of these plants are the same, so I am satisfied that, at least, they are the same taxon.
The photograph below shows the Cwm-hwnt habitat with scattered Campylium colonies. 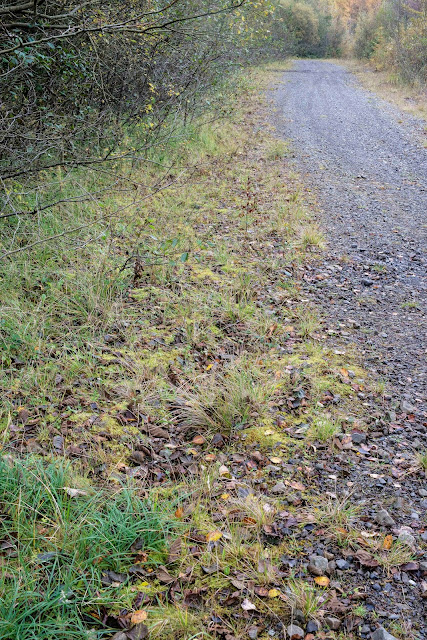 The colonies are pale green, fairly compact and consist of upright plants. Typical associates include Bryum psudotriquetrum, Calliergonella cuspidata, Cratoneuron filicinum, Ctenidium molluscum and Fissidens adianthoides and you might describe this as a base-rich flush. 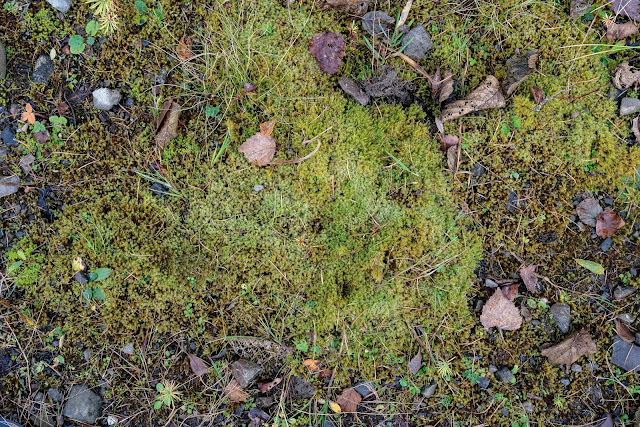 The plants, which have a very nice scent (I've not seen that described elsewhere), are small but their size falls within a range for both protensum and stellatum. They are not as large as some plants I've seen in dune slacks. The are not prostrate but some plants have some pinnate branching. 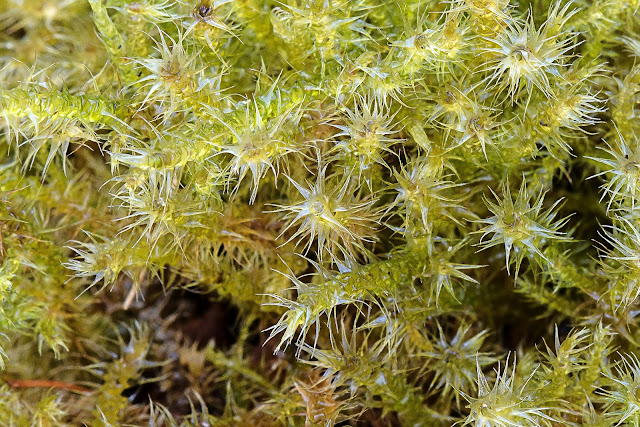 The Campylium key in Smith separates the two species on the basis of habit (prostrate = protensum versus upright = stellatum), the relative length of the acumen (in abruptly narrowed leaves) and in the anatomy of the leaf - whether alar cells form distinct auricles.
In all the colonies I examined, there were no prostrate plants.The longest acumen I could find was 65% of the total leaf length. This is at the upper limit for stellatum (the acumen can be much longer in protensum). Some leaves show a squarrose tendency, which is a protensum characteristic, but this is not a prominent feature (see photo above): 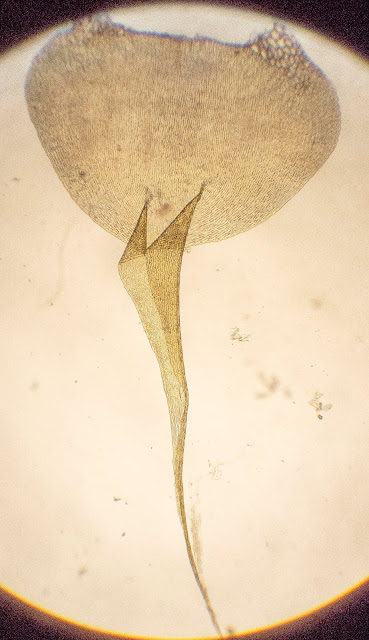 And the alar cells form distinct auricles (which is a feature of stellatum): 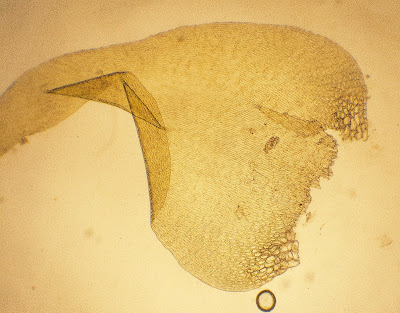 On balance, I think these forestry track plants are Campylium stellatum, although the habitat may seem suitable for Campylium protensum. Comments and opinions on my interpretation please.

There were some scrappy shoots amongst the Fissidens adianthoides, which at first glance looked like an interesting Cephalozia, but I'm suspecting they may just be young shoots of Lophozia excisa. Given the habitat of basic seepage on a road cutting, the latter is perhaps more likely, but without any fertile parts or gemmae it may best just be forgotten?  Any comments welcome before I do just that.
NB smallest tick marks on low power images = 25µm and at higher power = 2.5µm. The largest shoots I could find were just over 1mm wide. 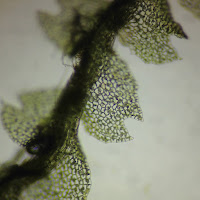 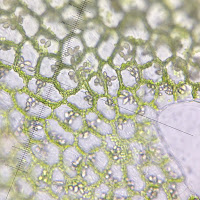 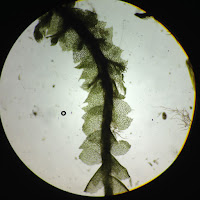 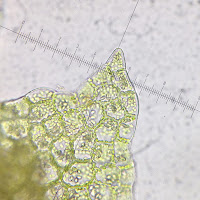 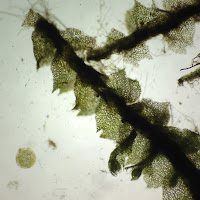 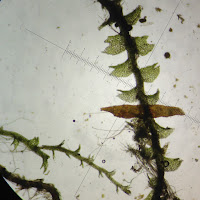 An opportune and totally random stop just off the A470 for a 15 minute bash to boost SO00R produced some useful records including Distichium inclinatum, Gymnostomum aeruginosum and some lovely dense cushions of Campylium protensum. The cutting was well vegetated with quite a lot of scrub, but open areas with loose shale and the occasional rock exposure supported a distinct suite of seepage calicoles, with the above species all being well represented. 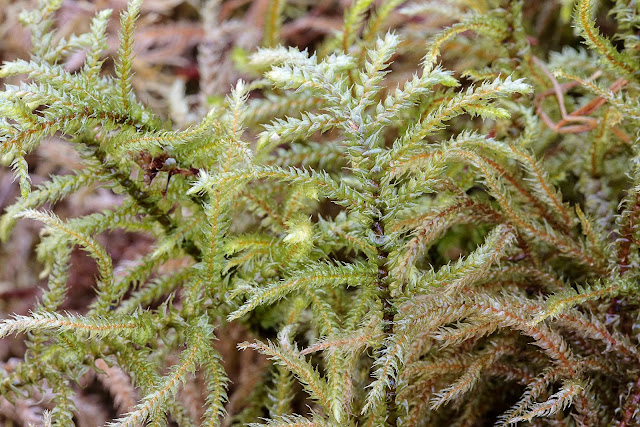 Here's an update on the distribution of Loeskeobryum brevirostre in Glamorgan (tetrads), at least according to my current Mapmate records, All records (except for one in the Pyrddin Valley, Brecon side of the river) are for NPT, where it is most frequently associated with larch, particularly on reclaimed coal tips and open cast. There is plenty of this habitat elsewhere in Glamorgan, e.g. in Bridgend and RCT. There may be less suitable habitat in Swansea but the Penllegaer plantation may be  good place to look for it. This is a relatively new ecology for this species but its association with coal tips has been mentioned before. In the Pyrddin Valley it is found in a more 'native', humid-ravine type habitat. 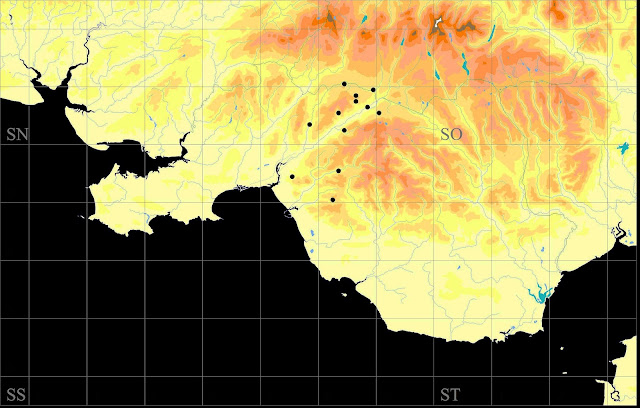 
Other interesting species that occur in similar places include Sanionia uncinata. 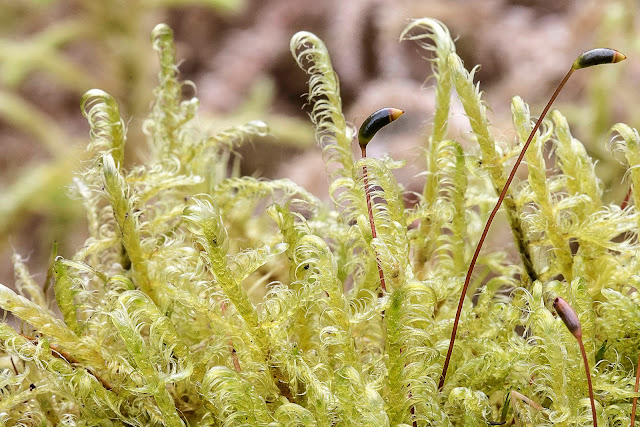 A couple of samples collected from the Costa Brava a few weeks back, during a brief excursion following my niece's wedding. It's not beyond the realms of possibility one of these species could turn up in Glamorgan, the former more likely given it's occurrence in Monmouthshire. [NB both sample id's unverified] 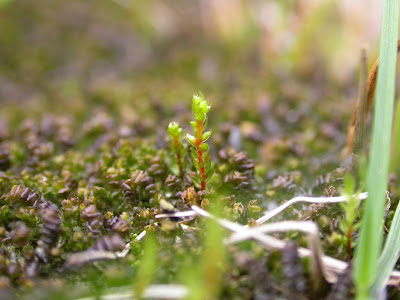 Charles asked for a rundown of the bryophytes I have found on forestry tracks in Carmarthenshire.  The following is an update of the table we included in Mosses and Liverworts of Carmarthenshire; there's a similar one in my Pembs Flora too.  It comprises 1006 records of 122 taxa recorded by me (rather than any other Carms bryologists) on forestry tracks (as opposed to banks or ditches by those tracks).  Clearly these are not rigorously scientific records, although I have been pretty consistent in noting habitat - the greater number of records of Campylopus subulatus than Calliergonella cuspidata reflects its perceived rarity and therefore a greater number of one-off records (perhaps I should filter them by tetrad/monad).  Anyway, they give a general impression of the richness of this habitat!!

2: sorted by number of records