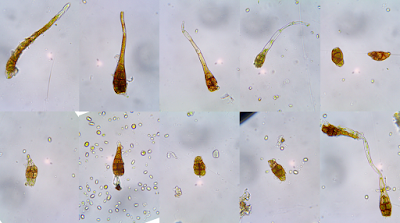 I have recently put a fairly length blog article on the Sussex site (here) regarding the differences between L. berica and Gyroweisia tenuis.  Could be of some help in South Wales!  Not all patches of either species are readily identifiable and it's definitely worth collecting a goodly amount from different parts of a colony to help name it.  The books are conflicting in some respects which doesn't help.  The rhizoidal gemmae shown in the picture (actually on secondary protonema) are only of use to prove it is one or the other although there is a possibility that plants with lots of them are unlikely to be Leptobarbula.  I need a lot more fruiting specimens of both species to take this any further and it is crying out for molecular work which I would personally expect to unite these two, along with G. reflexa into one genus.
Posted by Fissidens at 10:53 1 comment: