Filling in the gaps

During the last few weeks H and I have been revisiting a lot of NPT monads in an attempt to fill in the gaps in the records of several common species like Bryum dichotomum, B. argenteum and Funaria hygrometrica, mostly along forestry roads. 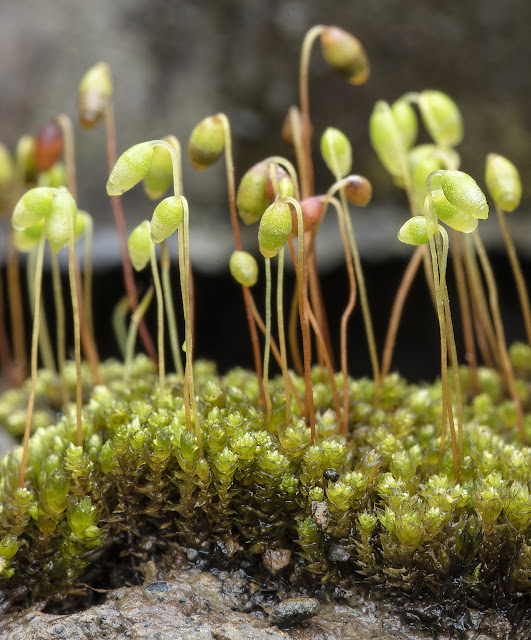 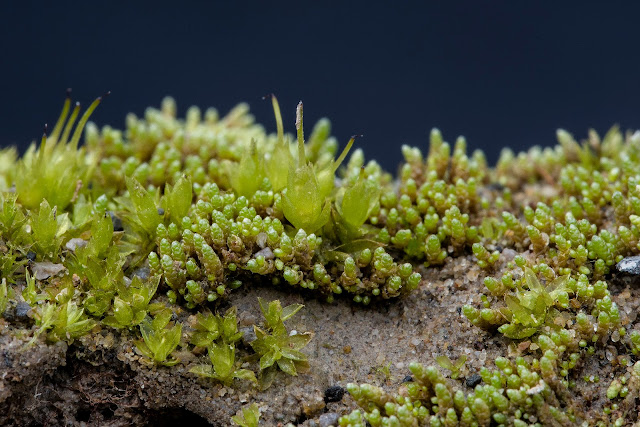 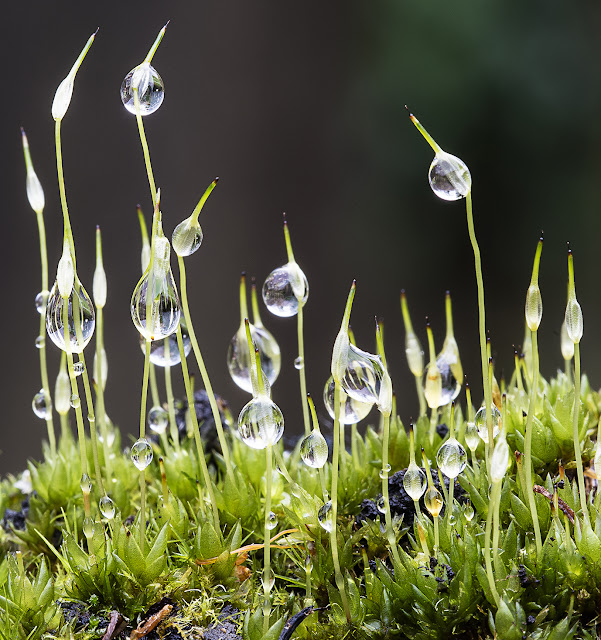 Now is a good time to record these seemingly prosaic species, which are important ruderal pioneers. Although we haven't seen anything very special, it was nice to see a colony of Blasia pusilla along a cinder track near the Tennant Canal in Jersey Marine yesterday. Unfortunately, the plants were rather decrepit and they had lost their flasks, but there were a few stellate gemmae. 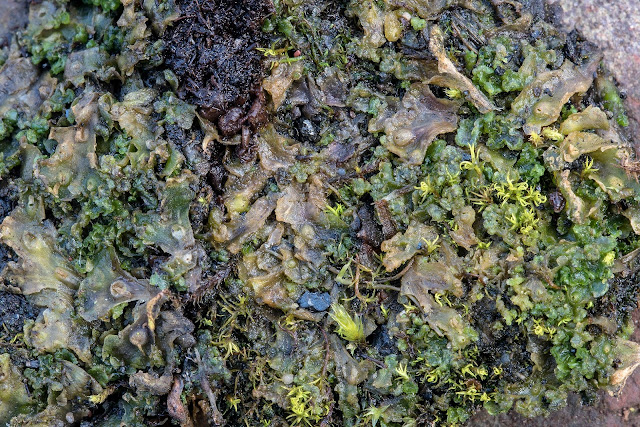 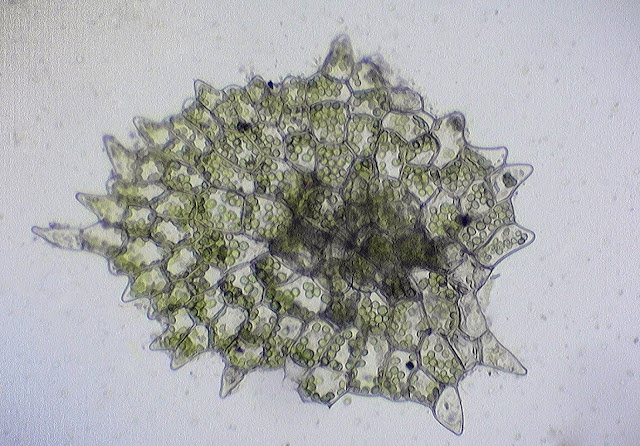 This is the third population we've seen in NPT, but colonies are always rather transient.

Graham and I have nearly finished our report on the oceanic bryophytes of Coedydd Nedd a Mellte SAC, with our own photos plus a few by other South Wales Bryologists.  The only gap was the Aphanolejeunea colony in the middle of the footpath to Sgwd Gwladus - in Glamorgan and the southernmost patches of this species in Britain.  Bea and Johnny were keen on a visit to the waterfall today, and I managed to surreptitiously grab a photo of the tree as well.  Double success :-) 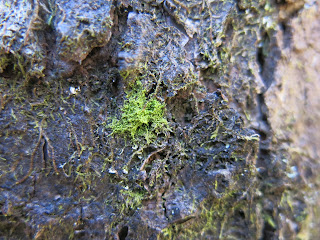 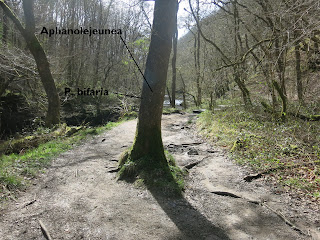 The Aphanolejeunea tree - admire but do not collect!!

The only other bryophyte I noticed was a relatively large Fossombronia on one of the dry promontories in the river (again in Glamorgan); sadly there were no sporophytes and I didn't want to check its rhizoids because there were only two thalli.  Something to revisit. 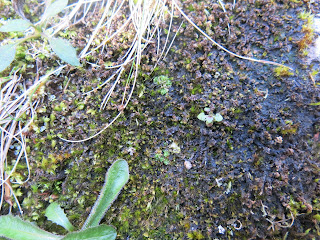 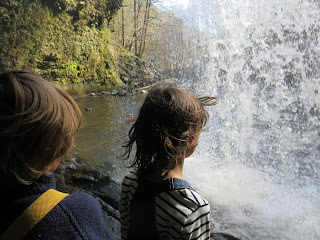 My quest for Petalophyllum at Kenfig continues without success, though I've still not given up hope of refinding it. This is one of a small suite of species that have either disappeared, or are at critically low levels at the site, despite much good work having been done to restore and create favourable habitats. In addition to an apparent absence of Petalophyllum, I've not encountered any populations of the following:
Abietinella abietina - last recorded by Smith in 1963.
Distichium inclinatum - a small amount recorded by Sam in 2012, so possibly still present.
Moerckia flotoviana - last recorded in tiny quantities at two sites by Sam and the SAC monitoring team in 2012. I have looked briefly at these sites but failed to relocate any plants.
Preissia quadrata - the last records were of two tiny colonies noted by Sam in 2012.
Racomitrium canescen - last recorded by Peter Jones in 1984.

Species which would appear to be critically low include:
Leiocolea badensis - still present but highly localised.
Riccardia incurvata - the population found by Sam in 2012 is still present, but appears to have declined markedly.

Thankfully there is some good news and those species species holding their own, or possibly even doing well include:
Amblyodon dealbatus - since its discovery at the site by Sam and Clive Hurford in 2012, at least six sites have now been identified. Last Thursday I came across a new colony with lots of developing capsules (in fact this is the first colony I've found with capsules). I'll be back to photograph it in a few weeks after they ripen and I have marked a couple of patches (white plant label tops in photo), should anyone feel inclined to check it out for themselves [8+ patches (largest 10cm x 6cm) in 2m x 1m area SS7914881233].

Bryum intermedium - first recorded by Sam in 2012 and then by David Holyoak in 2015. Last year I noted plants at David's site with young fruit, which looked good for this species, but unfortunately the site has been destroyed (only temporarily I suppose) by bikers, who are a constant presence in this area.

To date 157 bryophyte taxa have been recorded at KNNR. Amongst my casual records last Thursday I was surprised to find both Thamnobryum alopecurum (photo) and Brachythecium rivulare were additions to the reserve list, so next time you visit this large site, don't assume it's all been done. 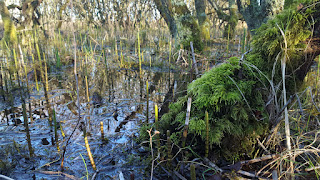 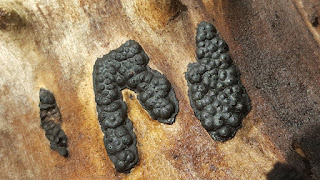 The easternmost of the west 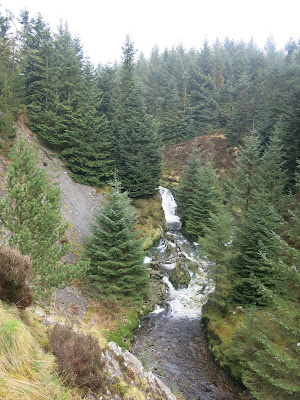 Work took me to the valley of the Afon Diliw, which forms the border between Ceredigion and Montgomeryshire.  A couple of hours looking for bryophytes (and lichens) produced about 80 species in the main tetrad (SN87I) and 50 in the fragment of SN87J that falls within VC46.  Getting here involves driving in from the east (so it's a major trek from Aberystwyth) because the road in from Cwmystwyth is only suitable for 4x4, so as far as I know it was completely unknown bryologically.

There weren't any major surprises, and my hoped for oceanic liverworts were absent (except for copious Colura).  The most interesting species were Pohlia elongata (photo) on a rock outcrop, Jungermannia obovata by the river, Sphagnum girgensohnii (photo) and S. russowii (photo) on steep banks, and a patch of Lophozia incisa.  Lichens need a bit more checking, but Usnea filipendula and potential Hypotrachyna sinuosa were highlights. 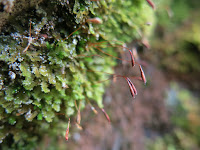 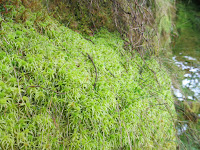 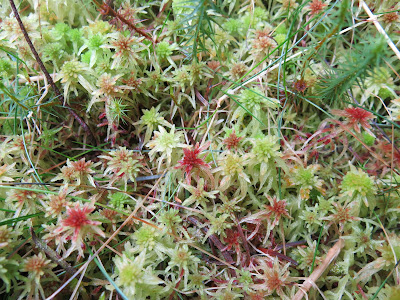 I had a quick jaunt up to Llantrisant Forest (ST0284) this morning, with Daltonia firmly in mind. I followed the Nant Cwm-du from the lane down to the River Ely, but unsurprisingly there was no Daltonia to be found (it probably wasn't humid enough - the conifers being largely hemlock and larch rather than spruce - and there were no willows). There was ample compensation though, with a small patch of fruiting Herzogiella seligeri on the end of an old conifer log. 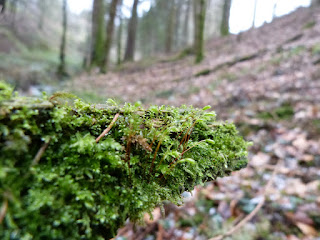 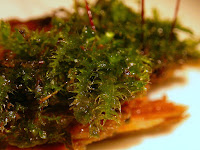 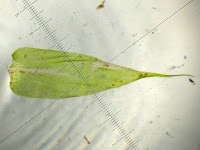 It was nice to see some Bog Beacon too, the fruitboides poking their heads out of a shallow pool which also held some Sphagnum squarrosum. 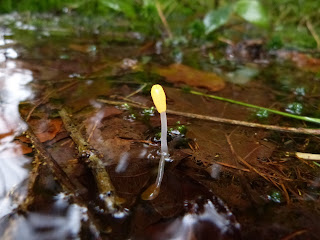 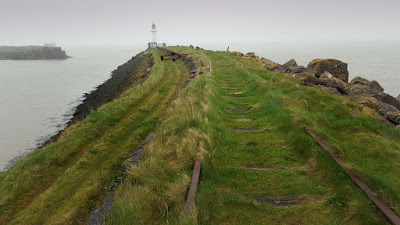 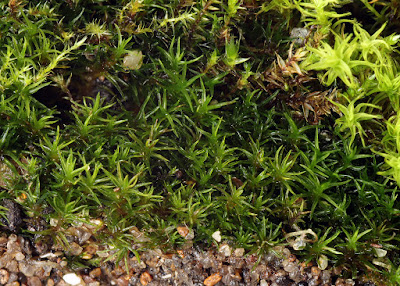 A walk out to the lighthouse on Barry's west breakwater in yesterday's murky conditions gave the opportunity to make a list of bryophytes on what must be a regularly storm-battered and salt-sprayed pier. Given the exposure, I was pleasantly surprised to record about 25 species, the most unexpected of which turned out to be Didymodon umbrosus, found unusually well-grown near the end of the pier at ST124665. Assuming I have the identification right, this is only the 3rd Glamorgan (4th? Welsh) record, but at what would seem to be a most unlikely location, growing on gritty soil gaps in the stones as shown by the arrow above. Direct associates growing with D. umbrosus, shown in the image below, include D. tophaceus, D. insulanus, Bryum dichotomum plus Amblystegium serpens var. serpens and Trichostomum crispulum were also noted with it in the field. 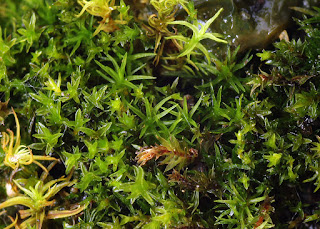 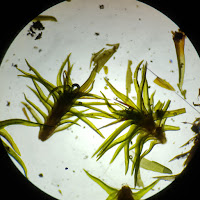 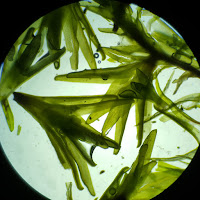 Adjacent to the breakwater, the tufa cliffs in Jackson Bay ST120666, which extend almost all the way along the east cliff of Nell's Point, held abundant Adiantum capillus-veneris and Eucladium verticilatum. This area looks good for Southbya, but my casual inspections during our walk failed to spot any. I'm not sure how well these cliffs have been searched by Gareth, George or others, but the cliffs would seem worthy of closer inspection should anyone find a bit spare time and they're down that way. 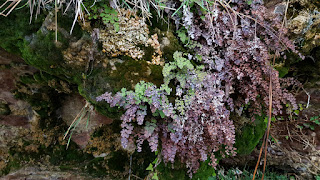 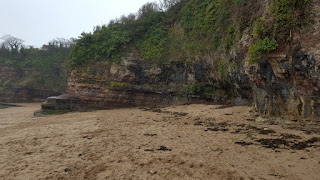 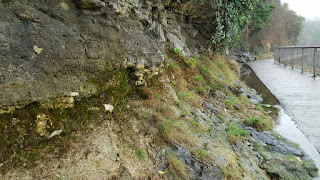 I thought it was worth bringing this to the top again, as there's been an update bringing us a little closer to the identity of this moss, as discussed in the comments ... 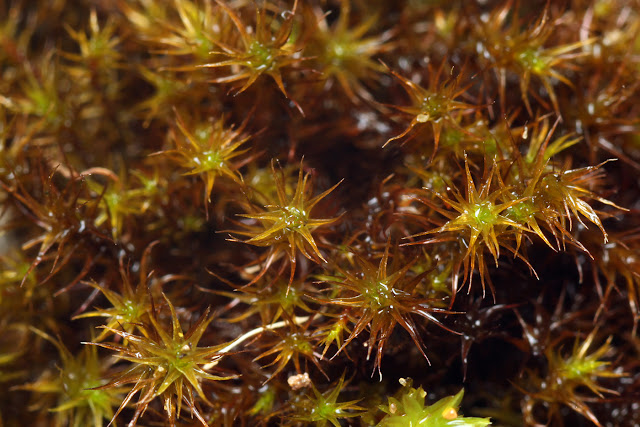 After a bit of searching, I can't help feeling the material I've seen recently on base-rich coal spoil at Grovesend and concrete bases at Mynydd Lliw must be the poorly described D. validus referred to in the D. acutus entry in the new atlas. The taxon is reasonably well illustrated on the Swiss Bryophyte website as D. rigidulus var. validus. The photographs here should provide a reference against which any similar material encountered can be compared, so we can at least record it consistently until the taxonomy is resolved. The ultra-pointy leaf tip and broad base seems pretty diagnostic, especially when coupled with the darkish brown appearance. Sam, I'll send you some material for your opinion / reference. Did you say Des was doing some work on this group? If so would he be interested in a sample? 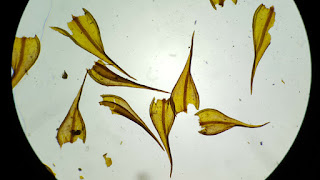