nearest i'll get to Lapland this Xmas

Just downloaded six months worth of photos from my phone and came across this rather bad pic that I had forgotten about.  Taken during family walk around the Carmarthen Fans last summer - at one point the footpath goes alongside a crag with a lovely array of arctic alpine plants and almost brushing your face are a few patches of this Amphidium. 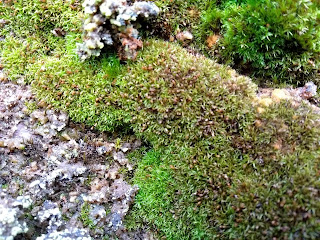 On Saturday I spent a morning in Dinas Powys, specifically in tetrad ST17K - the last remaining tetrad in ST17 with no bryophyte records. It proved more interesting than expected, with a fair bit of woodland in the north and some attractive limestone outcrops. 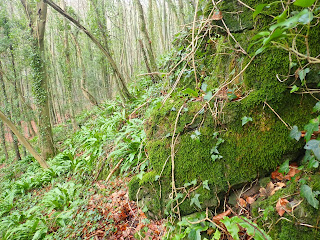 Most of the outcrops were smothered in Thamnobryum and Anomodon, but there was a small patch of Conocephalum salebrosum in one area. The best outcrop (ST149719) held Taxiphyllum wissgrillii and a fair bit of Marchesinia mackaii (the first time I've seen it in the Dinas Powys woodlands, and new for ST17). It was growing near an impressive lichen, which Sam has identified as Dermatocarpon miniatum (thanks Sam). 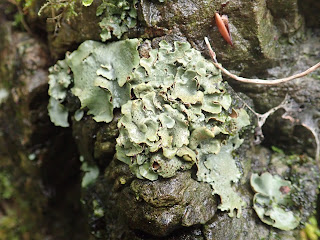 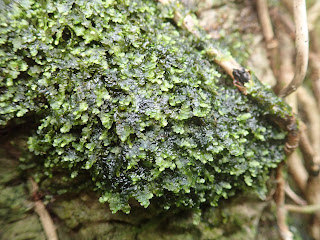 I finished the outing with a quick walk around Dinas Powys Common, which added some open ground species including Microbryum davellianum (spores checked) on a patch of compacted soil. I haven't entered the records yet, but the tetrad list should be up to around 60 species.
Posted by GMT at 10:28 No comments:

Just before Christmas I spotted three uncommon mosses at Dingestow: Plagiothecium latebricola was new for the area (bryophyte number 242), Bryum moravicum was the 2nd Dingestow record and the first in VC35 since 2008, and Aulacomnium androgynum used to be frequent at Dingestow in 1999/2000 but was last seen in VC35 in 2009.  The Plagiothecium is remarkably small and easily ignored/overlooked, but formed a dense cover over ca. 30 square cm of a huge log. 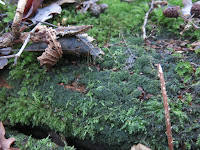 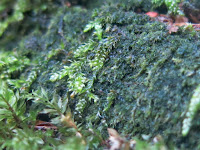 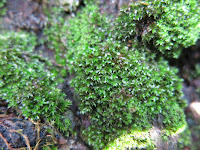 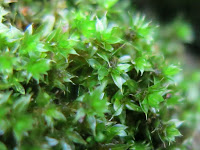 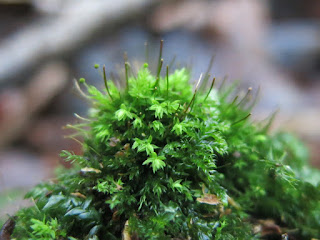 ...well, I think so! A brief stop today to look at some semi-interesting flora growing on a few spoil tumps in the middle of an abandoned building plot revealed a good quantity of a richly fertile Cephaloziella. With angular gemmae, edentate lobed perianth bracts that are connate, I'm pretty confident this must be integerrima, a potential first for Wales. If confirmed I'll need to determine how extensive the population is. I have a feeling building works were stopped ~6 years ago, as the developer did not have planning permission. This is a highly vulnerable population, but best we get the id confirmed first before looking at safeguarding the species at this site. There is no referee listed for this genus in the latest FB, so Sam, I wonder if you can suggest someone who would be willing to examine a voucher, yourself perhaps? [I called in very briefly again the following day and noted integerrima to be present on a few additional tumps, the mounds being the ground excavated for a series of post holes about 10 years ago!].

another little look at Cefn Bryn 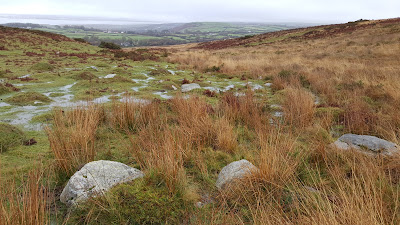 I spent an hour and a half on Cefn Bryn in the rain on Saturday and recorded 53 species in an area of flushed ground to the north of Arthur's Stone.  Kurzia pauciflora was more frequent here than I've seen elsewhere on Gower, typically growing through mounds of Sphagnum papillosum. Amongst eight Sphagnum, tenellum was the only species of any note.
I only came across one base-enriched flush, where there were small quantities of Palustriella falcata and Sarmentypnum exannulatum mixed in the short turf, which held frequent Campylium stellatum and Scorpidium cossonii.
Grimmia trichophylla & Racomitrium heterostichum were present on several of the rocks in the area, surprisingly this being the first time the latter has been recorded on the Gower peninsula.