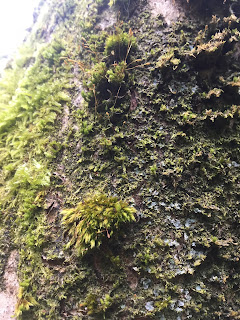 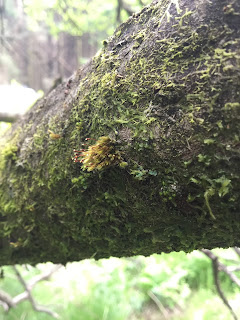 I spent an enjoyable and interesting day in the forestry along the Nant Clydach, near Resolven in Cwm Nedd, looking at mature willows along forest roads and streams with Hannah Shaw from NRW. We were joined by Charles for the afternoon. To my surprise I spotted a tuft of Daltonia on the first trackside willow that we checked, but after that it was slow going until mid afternoon when we descended to the Nant Clydach and located two more colonies of Daltonia, one of them holding 8 tufts. Other bryophytes seen during the day included Colura, Lejeunea cf patens, Zygodon conoideus and surprisingly frequent Sanionia uncinata. Notable lichens were also quite hard to find, but the riverside willows and ash held some Megalaria pulverea and a small patch of Lecanora jamesii. Thankyou to both Hannah and Charles for their company and wide-ranging discussions during the day.