This season I'm hoping to focus on the Glamorgan part of Caerphilly county, much of which has received little attention in the past (though it looks promising). Today I had a drizzly outing to the woods west of Llanbradach. After a couple of hours I'd seen most of the usual woodland suspects and generally had an enjoyable time despite the drizzle, but had seen nothing out of the ordinary and was on the point of turning back with the school run looming. So imagine my surprise when I came across a small stream in a not especially humid east-facing location which had several good sized patches of Jubula hutchinsiae. It was growing on rocks over a reasonable length of streamside habitat at ST145898. 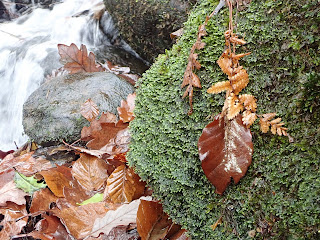 This is the 7th Glamorgan tetrad and the most easterly to date, and only 500m from the VC35 border. I remember Sam saying in the past that there were no VC35 records from the west of the county - is that still the case? 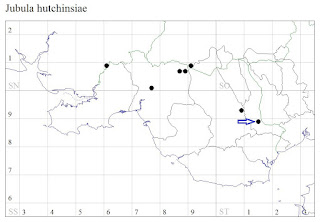 After finding the Jubula, I scrambled up and down the stream for a little while and found some Heterocladium heteropterum var. heteropterum and a couple of nice patches of Hookeria lucens.