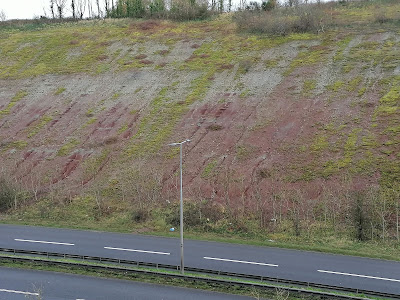 Every time I head into Cardiff on the western access road I tell myself, one day I must stop and look at the road cutting flora. The sparse vascular plant cover and abundant bryophytes on the eroding banks always looks promising. Yesterday I was nearby with a spare couple of hours, so I parked in Caerau and climbed over the fence. 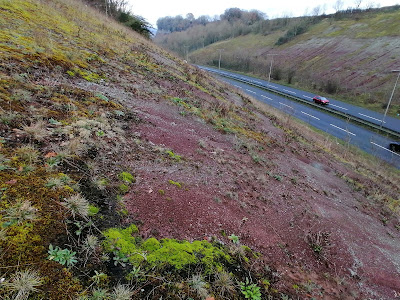 For ref the BGS website shows the geology to be a combination of Blue Anchor Formation and Mercia Mudstone Group, these Triassic deposits exposed by the A4232 cutting. The lack of any top dressing has allowed an interesting assemblage of 26+ terricolous species to colonise. Hypnum cupressiforme var. lacunosum, Ctenidium molluscum (only on the S.E. side of the road) Fissidens adianthoides and Trichostomum crispulum were all abundant, with other frequent species noted including Aloina aloides, Dicranella varia, Didymodon acutus, Didymodon ferrugineus and Homalothecium lutescens.